skip to main | skip to sidebar

The Scots descended on the city in droves. Like the Battle of Boroughmuir, they had turned up in the thousands with a purpose. Riding through the city centre, one couldn't go a block without spotting a kilt or hearing that thick, unmistakable accent. With the tartan dotted through the city streets, and the volume with which they were present (save for the obvious buildings and canals,) one just might have thought they'd turned up in Glasgow.

According to the BBC, who have come to be a source one can trust when it comes to supplying the news, twelve thousand tartan wearing (and Tartan drinking for that matter) Scots were in Amsterdam this weekend. What was the occasion, one might ask? And rightly so. Why would a nation of people flee to another country for a mere two days? The answer is national pride. The Scottish National Football Team were in town to take on their Dutch counterparts in a very important World Cup qualifier.

Yes, every Scotsman and his mother turned up for the match. Not with the intention of celebrating victory, mind you. No, that would have been very unrealistic. With a mounting injury list and depleted confidence, there was no chance of a Scot win. But what the Scots did bring to the table was character, and plenty of it.

Second in a weak group (also including Iceland, Norway and Macedonia,) the Scottish have every chance of qualifying for their first World Cup in 12 years, but what they would not be doing is moving that one step further on game night. But you wouldn't have known it to see them in town - they were in high spirits and full of vigour.

And full of alcohol. Most of them had flown into town the night before, and so from nine o'clock on game day, they had been bang on it; drinking heavily and talking a good game. By six o'clock that evening, they had more drinks than you, dear reader, have had hot dinners. Witnessing them stumble along the cobbles, they so obviously barely had a leg to stand on. "What will these drunken beasts be like by nightfall?" I wondered as I pedaled myself home. "When the moon is holding water in the midnight sky, will they take to ravaging the locals?" I shuddered to think. What any sane man would have been doing amongst these animals is beyond me, yet there I found myself, in the thick of it, as it were; careening, mooching - a detached observer.
Posted by Le Gnome de Magique at 7:06 AM No comments: 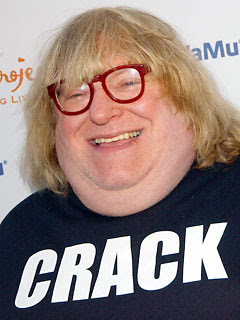 We returned to the deck, a couple drinks in hand, and I basked in the ever-giving sun to continue my reading. Theroux was in Ceylan, mixing with whores and preparing for India.

Lunch consisted of grilled kielbasa and good, strong German beer. We ate our sausages and I heaped praise on Jeremy for his choice in location. The lake below us shimmered from the afternoon sun and I felt that I could stay there forever, in that little pocket of nowhere, north of Kingston.

We were then introduced to Mark Kramer (see inset photo). Mark was a veteran of those parts, having lived in the area with his parents since 1989. We were introduced to Mark, who, climbing the stairs which led to the deck, carried an armful of various ingredients - a plastic bottle of Canada Dry, a Tupperware container full of ice, a litre of Gibson's finest and a lowball glass - those which would combine to make his cocktail of choice: Rye and Ginger. This man had obviously once been a Boy Scout.

He made sure to introduce himself by his full name: "Hi, I'm Mark Kramer." Like he was some bigshot we all had heard about, but had never had the good fortune enough to meet.

Mark Kramer drank his whiskey like a champion, sucking on his upper lip every time he took a healthy gulp. The guy even brought his own glass - a tumbler (of course) with no apparent markings. He seemed intent on catching Jeremy up on all the neighbourhood gossip: those who were moving in, those who were moving out, those who had recently purchased land, the fishing - what was biting and what wasn't, yet primarily talked about his own retreat - what he had been working on during the spring and summer months and what was planned for winter. Kramer liked to talk, that much was evident - and by the palid look on Jeremy's face as Mark hammered on with the local dish, one could tell that he'd heard enough of it.

Mark and Jeremy were of the few select crowd who stayed in this area all year around - they enjoyed the isolation. "Summers are great, of course, but I really thrive on the winters when you don't see a single soul on the lake." Jeremy had said as much to me around the campfire the night before, as we passed the Wild Turkey back and forth. A man could do some serious thinking up there. Blow the cobwebs off the old typewriter and bang out a few dozen pages. I could only imagine the peacefulness of such times; weekly jaunts into town for the bare necessities, ice fishing, all no doubt coinciding with the out and out loneliness that would sure follow.
Posted by Le Gnome de Magique at 1:34 AM No comments: